British journalist and broadcaster Jon Snow went to Tanzania and Uganda to see Sumitomo Chemical’s Olyset Nets in action, and to personally deliver Olyset® Nets to Namasagali, a village where he worked over 30 years ago. 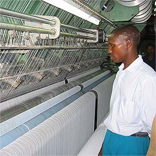 So what happened to the G8’s year of Africa? What happened to the £800 million commitment to roll back malaria by the year 2015? Ahead of the G8 summit in Gleneagles last year, top journalist Jon Snow reported live from the village of Namasagali in Uganda. He found the entire area racked with malaria, and the villagers asked him for nets.

After seeing his report, Sumitomo Chemical donated Olyset Nets for the entire village. When Jon Snow returned with the nets, he first visited the A-Z Factory in northern Tanzania where Sumitomo Chemical’s Olyset nets are made, went to a village nearby where they have already been successfully trialed, and ultimately traveled back into Uganda and Namasagali.

In his article about the trip for the Guardian Newspaper, Jon Snow wrote:

A year ago each of the villagers was equipped with a long life mosquito net. In the months since, the incidence of malaria in the village has fallen to zero.

Elerehema Manga, a 60-year-old farm laborer earning £2 a week, is typical. He was given nets not only for his bed but also for his windows and the gaps in the eaves of his hut. The total cost was £8, hence the need for outside funding from agencies such as Unicef.

I asked him about his experiences of malaria. “I had it three times last year. Now, since the nets were brought in February I haven’t had it once.”

Read The Guardian article in full