Bush calls for use of nets in malaria war – Daily Nation 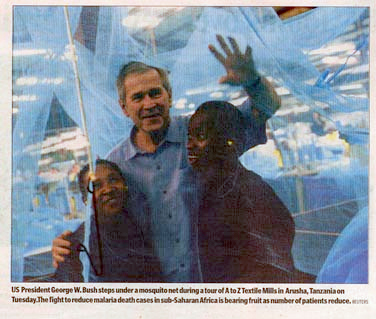 President George W Bush has urged African countries to fight malaria, the continent’s leading killer disease, through the use of treated bed nets.

He said there was significant progress made in controlling the mosquito-borne disease with the use of bed nets treated with insecticides.

The US president made the plea after visiting the Arumeru District Hospital in Tengeru on the outskirts of Arusha. During the visit, he distributed bed nets to patients.

President Bush, who arrived at the hospital at 10.40am, said his government launched the President’s Malaria Initiative (PMI) in 2005 because it believed every human life was valuable.

He said that the US government had set aside $1.2 billion under the initiative to fight malaria in 15 African countries, including Tanzania.

Mr Bush said indoor residual spraying against mosquitoes and insecticide-treated nets can change the malaria situation in Africa where about one million people die from the disease every year.

“The treated nets is the simplest and most cost-effective technology in fighting malaria,” he said in a brief speech after visiting several wards at the hospital located close to the Arusha-Moshi highway.

The American leader said a recent survey has shown that malaria deaths had significantly gone down in Muleba District and Zanzibar following the use of the treated nets.

He added that under a programme supported by his government, the World Bank and the Global Fund, some 5.2 million bed nets would be manufactured and distributed throughout Africa.

The nets would be manufactured at the recently-inaugurated A to Z Textile Mill at Kisongo outside Arusha.

The plant, a joint venture of the Arusha-based A to Z Textile Mills Limited and Sumitomo Chemicals of Japan, will produce 10 million nets a year when fully operational.

President Bush visited the plant yesterday before proceeding to a secondary school dedicated to children from pastoral communities later in the afternoon.

He praised Tanzania for spearheading the war against malaria, which kills over 100,000 people in the country every year, mostly children under five and pregnant women.

Dr Aziz Msuya, the Arumeru district medical officer, said the Tengeru hospital was one of the health facilities under the PMI programme.