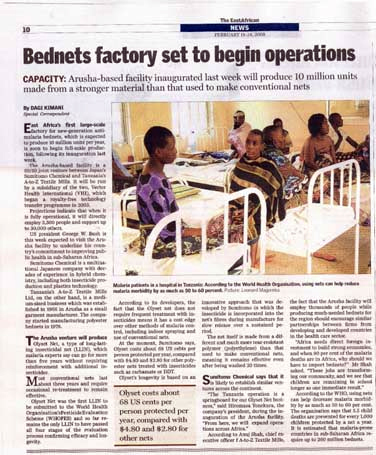 The Arusha-based facility is a 50/50 joint venture between Japan’s Sumitomo Chemical and Tanzania’s A-to-Z Textile Mills. It will be run by a subsidiary of the two, Vector Health International (VHI), which began a royalty-free technology transfer programme in 2003.

Projections indicate that when it is fully operational, it will directly employ 3,300 people and support up to 30,000 others.

US president George W. Bush is this week expected to visit the Arusha facility to underline his country’s commitment to improving public health in sub-Saharan Africa.

Sumitomo Chemical is a multinational Japanese company with decades of experience in hybrid chemistry, including both insecticide production and plastics technology.

Tanzania’s A-to-Z Textile Mills Ltd, on the other hand, is a medium-sized business which was established in 1966 in Arusha as a small garment manufacturer. The company started manufacturing polyester bednets in 1978.

The Arusha venture will produce Olyset Net, a type of long-lasting insecticidal net (LLIN), which malaria experts say can go for more than five years without requiring reinforcement with additional insecticides.

Olyset Net was the first LLIN to be submitted to the World Health Organisation’sPesticideEvaluation Scheme (WHOPES) and so far remains the only LLIN to have passed all four stages of the evaluation process confirming efficacy and longevity.

According to its developers, the fact that the Olyset net does not require frequent treatment with insecticides means it has a cost edge over other methods of malaria control, including indoor spraying and use of conventional nets.

At the moment, Sumitomo says, Olyset costs about 68 US cents per person protected per year, compared with $4.80 and $2.80 for other polyester nets treated with insecticides such as carbamate or DDT.

Olyset’s longevity is based on an innovative approach that was developed by Sumitomo in which the insecticide is incorporated into the net’s fibres during manufacture for slow release over a sustained period.

The net itself is made from a different and much more tear-resistant polymer (polyethylene) than that used to make conventional nets, meaning it remains effective even after being washed 20 times.

Sumitomo Chemical says that it is likely to establish similar ventures across the continent.

“The Tanzania operation is a springboard for our Olyset Net business,” said Hiromasa Yonekura, the company’s president, during the inauguration of the Arusha facility. “From here, we will expand operations across Africa.”

According to Anuj Shah, chief executive officer f A-to-Z Textile Mills, the fact that the Arusha facility will employ thousands of people while producing much-needed bednets for the region should encourage similar partnerships between firms from developing and developed countries in the health care sector.

“Africa needs direct foreign investment to build strong economies, and when 90 per cent of the malaria deaths are in Africa, why should we have to import bednets?” Mr Shah asked. “These jobs are transforming our community, and we see that children are remaining in school longer as one immediate result.”

According to the WHO, using nets can help decrease malaria morbidity by as much as 50 to 60 per cent. The organisation says that 5.5 child deaths are prevented for every 1,000 children protected by a net a year. It is estimated that malaria-prone countries in sub-Saharan Africa require up to 260 million bednets.