The success and popularity of Long Lasting Insecticidal net (LLIN) campaigns combined with the agricultural use of insecticides has contributed to the emergence of pyrethroid insecticide resistance among mosquito populations in Africa and other malaria endemic countries. Olyset Plus is the ‘bite-back’ solution with enhanced knockdown and kill against pyrethroid-resistant mosquitoes.

Olyset Plus is a durable polyethylene net containing 2% permethrin combined with 1% of the synergist PBO (piperonyl butoxide), which is incorporated into all the fibres on each side including the roof. Using patented slow-release technology, the net fibres release the two ingredients at a constant ratio of 2:1, ensuring optimum efficacy against mosquitoes, including those that are resistant, in even the toughest conditions.

Due to the excellent results from LLIN campaigns the adoption of pyrethroid treated nets as a key intervention in the battle against malaria has reached new heights. In many endemic countries, usage had reached 80% by 2011. Yet the pressure of using a single class of insecticides, pyrethroids, in all LNs as well as for Indoor Residual Spraying and agriculture has resulted in insecticide resistance in many parts of the world, particularly in Africa. 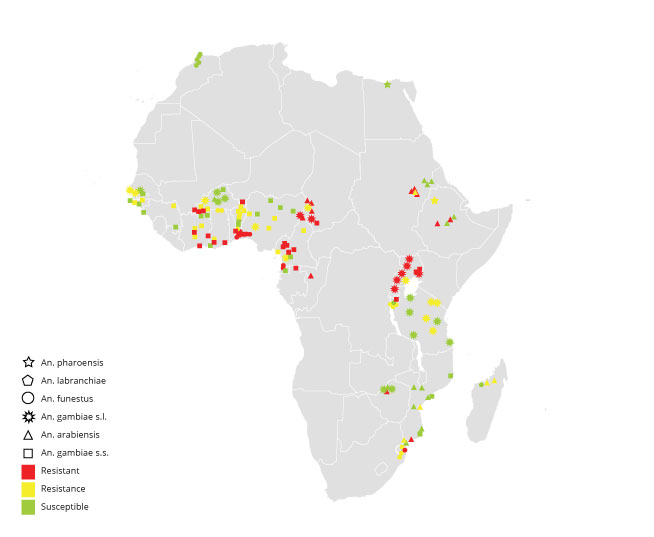 Olyset Plus is the first and only net on the market to incorporate PBO into every fibre and all surfaces of the net, providing enhanced knockdown and kill against pyrethroid-resistant mosquitoes.

WHO cone tests to evaluate speed of regeneration of Olyset Plus against field-caught, pyrethroid-resistant mosquitoes. Tests were performed one day after washing.

Olyset Plus vs. a Polyester LLIN against field caught resistant mosquitoes

Experimental hut trials in Cameroon: Olyset Net and Olyset Plus

Due to the rapid extension of pyrethroid resistance in malaria vectors worldwide, manufacturers are developing new vector control tools including insecticide mixtures containing at least two active ingredients with different modes of action as part of resistance management. Olyset Plus is a new long lasting insecticidal net (LLIN) incorporating permethrin and a synergist, piperonyl butoxide (PBO) into its fibres in order to counteract metabolic based pyrethroid resistance of mosquitoes. In this study we evaluated the efficacy of Olyset Plus both in laboratory and field against susceptble and multi resistanct malaria vectors and compared with Olyset Net which is a permethrin incorporated into polyethylene net.

Evaluation of the Efficacy of Olyset™ Plus in a Village-Based Cohort Study in the Cukurova Plain, Turkey, in an Area of Hyperendemic Cutaneous Leishmaniasis

The aim of this study was to measure the protective efficacy of Olyset Plus, a new long-lasting factory-treated insecticidal net (LLIN) incorporated with 2% permethrin and 1% of the synergist piperonyl butoxide (PBO), against cutaneous leishmaniasis (CL) transmission under field conditions. A village-scale trial, promoting the use of LLIN by the local inhabitants of the study area, was conducted as a pilot study in a new hyperendemic focus of CL caused by a Leishmania infantum/L. donovani hybrid parasite transmitted by proven vector species Phlebotomus tobbi in Cukurova Plain, Adana, Turkey, between May, 2013 and May, 2014

Churcher et al. also show that the combination bednets may provide some additional protection against resistant mosquitoes and reduce the number of malaria infections in some cases. The experiments show a simple test could help health officials determine which type of net would be most beneficial. The experiments and the model Churcher et al. created also may help scientists studying how to prevent increased spread of malaria in communities where mosquitoes are becoming resistant to insecticide-treated nets.

Olyset Plus is a new generation long-lasting insecticidal net that incorporates two active ingredients, the pyrethroid insecticide permethrin and the oxidase synergist piperonyl butoxide. Mixture nets such as this may have application against resistant mosquitoes, particularly those whose resistance is based on oxidative metabolism. There may also be enhanced activity against susceptible mosquitoes since mixed function oxidases are involved in many metabolic activities including activation of many substances to form their bio-active compounds, and hence evaluation was done against a conventional permethrin treated ITN as well as Olyset Net LN. Olyset Plus LN was made available by the WHOPES for Phase II evaluation.

The efficacy of Olyset Plus LN was evaluated in experimental huts against a wild, free flying susceptible population of Anopheles fluviatilis sensu lato in terms of mortality, deterrence, blood-feeding inhibition and induced exophily in Odisha state, East-central India following the WHO guidelines.