Where will the next vector control insecticides come from? 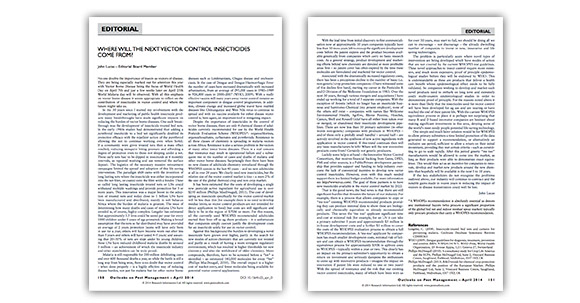 No one doubts the importance of insects as vectors of disease. They are being especially marked out for attention this year with Vector Borne Disease being the focus of World Health Day on April 7th and just a few weeks later on April 25th World Malaria day will be observed. With all this emphasis on vector borne disease it seems appropriate to reflect on the contribution of insecticides in vector control and where the future might take us.

In the 30 years since I started my involvement with the development and marketing of public health insecticide products many breakthroughs have made significant impacts on reducing the burden of vector borne diseases. One such breakthrough was the development of insecticide treated bed nets. In the early 1980s studies had demonstrated that adding a pyrethroid insecticide to a bed net significantly doubled its protective efficacy with the repellent action of the pyrethroid allowing the net to continue working even when holed.

If a community were given treated nets then a mass effect resulted, reducing mosquito biting pressure and affording a degree of protection even to those not sleeping under a net. These early nets had to be dipped in insecticide at 6 monthly intervals, as repeated washing and use removed the surface deposit. The logistics of the necessary massive retreatment campaigns limited the spread and adoption of this life saving intervention. The paradigm shift came with the invention of long lasting nets where the insecticide was either incorporated into the net fibre, or coated onto the fibre with a binder. These so called long lasting insecticide treated nets or LNs could withstand multiple washings and provide protection for 3 or more years. This innovation was a major boost to the adoption of treated nets and today close to 1 billion LNs have been manufactured and distributed, mainly in sub Saharan Africa where the burden of malaria is greatest. The issue of determining how many deaths and cases of malaria LNs have avoided is, of course, highly complex. Lengeler has estimated that approximately 5.5 lives could be saved per year for every 1000 children under 5 years of age protected. Making a broad assumption that the nets so far distributed may have provided an average of 2 years protection (some will have only been in use for a year, others will have become worn out after less than 3 years and others will have lasted 4–5 years) and assuming that 20–30% of nets are slept under by young children, these LNs have reduced childhood malaria deaths by around 3 million – an achievement of which the insecticide industry and other stakeholders can be truly proud.

Malaria is still responsible for 200 million debilitating cases and over 600 thousand deaths a year, so while the battle is still a long way from being won, there is no doubt that vector control – when done properly – is a highly effective way of reducing disease burden, not just for malaria but for other vector borne diseases such as Leishmaniasis, Chagas disease and onchocerciasis. In the case of Dengue and Dengue Haemorrhagic Fever the number of cases have increased dramatically with increased urbanisation, from an average of 295,000 cases in 1980–1989 to 926,000 cases in 2000–2007 (WHO, 2009). With a really effective vaccine still many years away vector control remains an important component in dengue control programmes. In addition, climate change and increased global travel have enabled diseases like Chikungunya and West Nile virus to continue to spread and with no vaccine available for either disease vector control is, here again, an important tool in mitigating impact. Despite the importance of insecticides in the control of vector borne diseases, there are only 4 chemical classes of adulticides currently recommended for use by the World Health Pesticide Evaluation Scheme (WHOPES)*: organochlorines, organophosphates, carbamates and pyrethroids. Resistance to all these classes of chemistry is spreading in malaria vectors across Africa. Resistance is also a serious problem in the vectors of many other insect borne diseases. There is a real concern that resistance may result in operational failure and a subsequent rise in the number of cases and deaths of malaria and other vector borne diseases. Surprisingly then there have been no new classes of adulticide chemistry introduced through the WHOPES system in the last 40 years – and no new adulticides at all in over 20 years. We clearly need new insecticides, but the relative size of the vector control market is tiny – a mere 2% of the size of the global chemical crop and non crop market.

It has been estimated that the costs of developing a single new pesticide active ingredient for agricultural use is over $250 million (Phillips MacDougall, 2013). The cost of developing an insecticide specifically for the vector control market will be less than this (for example there is no need to develop residue limits, as vector control products are not intended for direct application to food) but costs are still significant and likely to be in the region of $70M or more. For this reason, all the currently used WHOPES recommended adulticides started their lives off as ag chem products – it is unfortunate that companies simply cannot justify the development costs for an insecticide solely for use in vector control. Against this background the hurdles to developing a novel insecticide have grown ever higher, partly in the search for new modes of action chemistry that are currently not resisted and partly as a result of having a more stringent regulatory environment, which has resulted in higher thresholds for new chemistry and also the withdrawal of older chemistry. More compounds, therefore, have to be screened before a “hit” is identified – an estimated 140,000 molecules for every “hit” (Phillips MacDougall, 2010). The overall impact is a higher cost of market entry, and fewer molecules being available for potential vector control applications.

Click the link below to read the full whitepaper by John Lucas (Editorial Board Member) on where the next vector control insecticides will come from.