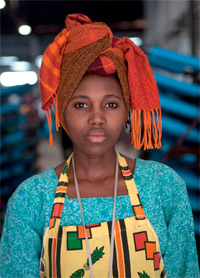 Olyset Net has been produced in Arusha, Tanzania since 2003 — where production facilities have grown to employ 8,000 people, making it one of the largest private employers in Tanzania. Recently, the University of London’s School of Oriental and African Studies (SOAS) set out to measure the impact on the local economy in Kisongo and neighbouring Arusha, with independent and authoritative research.

SOAS surveyed a sample of the workforce, chosen to represent different levels across the factory, with individuals chosen at random. Interviews were conducted in September and October last year by Synovate, a Tanzania-based market research company. The research – 65 separate, in-depth interviews with factory workers – was conducted in Kiswahili, the national language, with Synovate translating the questions and responses.

Interviews were also carried out with a number of managers (again, representing different levels), and with two members of senior management. Separate surveys were also carried out amongst 40 local businesses in the area around the Kisongo factory, and in Arusha Town. These surveys were designed to test whether the factory was creating ancillary employment and business opportunities in the local Kisongo and wider Arusha areas.

SOAS noted that the Kisongo factory had influenced improvements to local infrastructure. Aside from improved transport links, local villages now have water and electricity supplies and the factory has also supported the livelihoods of local Maasai pastoralists.

Adam Flynn, Sales and Marketing Manager at Sumitomo Chemical’s Global Vector Control division, said: “The VHI joint venture is what sustainable development around vital public health commodities should look like: an enterprise which not only addresses vital health issues but also delivers tangible, long-lasting development benefits. Malaria and poverty are intertwined; creating opportunities for sustainable employment is fundamental to poverty reduction. Africa-based net production has to be the way forward.”