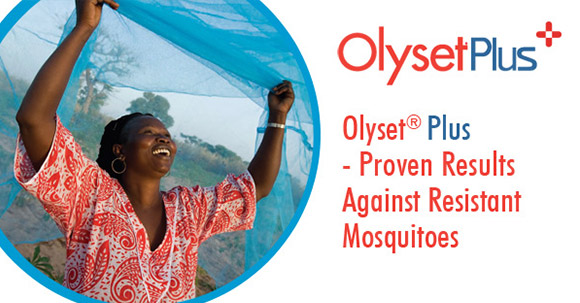 Enhanced knockdown and kill against susceptible and pyrethroid-resistant mosquitoes

The original Olyset Net remains one of the most effective and durable LLINs on the market. However Sumitomo recognised that, for some markets, improvements could be made in the speed of action and efficacy against both susceptible and resistant mosquitoes. This led to the development of Olyset Plus.

First long-lasting bed net to incorporate PBO in every fibre

Olyset Plus, also WHO recommended, introduces a number of new features including the addition of piperonyl butoxide (PBO), a synergist which increases the performance of the active ingredient permethrin and enhances activity against both susceptible and pyrethroid-resistant mosquitoes. It is the first and only net to incorporate PBO into every fibre and all the surfaces of the net.

Tatsuo Mizuno, General Manager of the Vector Control Division at Sumitomo Chemical said: “Sumitomo Chemical was the first company to develop fibre incorporation technology in bed nets. We realised that incorporation of insecticide into the fibre – using controlled release technology that allows insecticide to migrate to the surface and maintain a regular supply – is better than ‘gluing’ to the fibre surface, which leaves the insecticide vulnerable to abrasion and washing.

“Olyset Plus, which incorporates the ground-breaking technology and durability of our original Olyset Net, will enable us to save more lives and improve the quality of life for communities in malaria endemic regions affected by insecticide resistance.”

What is Olyset Plus?
Olyset Plus is a durable polyethylene net containing 2% permethrin combined with 1% of the synergist piperonyl butoxide (PBO), which is incorporated in all the fibres on all sides and also on the roof of the net.

Using Sumitomo Chemical’s Olyset controlled-release technology, the net fibres have been designed to release the two ingredients at a constant ratio of 2:1, thus ensuring enhanced efficacy against all mosquitoes (including those which are resistant), for the life of the net.

What is PBO?
A synergist with low mammalian toxicity, PBO has long been used to improve the performance of pyrethroid insecticides, especially household aerosols. Synergists are chemicals that lack insecticidal activity on their own but enhance the insecticidal performance of other chemicals.

Olyset Plus Regeneration
The rate at which permethrin and PBO migrate from the internal reservoir in the fibre to the surface of the net – the ‘bleed rate’ – has been adjusted in Olyset Plus to provide rapid regeneration, making the net active again within 1-2 days of washing.

In areas where resistant mosquitoes have been found, rapid regeneration after washing and, therefore, the provision of an almost continuously available insecticide plus PBO barrier, is required to maximise the protective effect.

Emerging insecticide resistance – a real threat
Universal Coverage (80% coverage with Lens of at risk populations) was achieved in many African countries by 2011. However, the pressure of using a single class of insecticides – pyrethroids – in all LLINs, as well as for indoor residual spraying and agriculture, has resulted in insecticide resistance, particularly in sub-Saharan Africa.

The only way to overcome most types of resistance is by using a new class of insecticide which, as yet, is not available. Therefore, the best approach in the interim is to continue to formulate LLINs with pyrethroids and to use the synergistic properties of PBO to improve their activity against susceptible and resistant mosquitoes.