Sumitomo Chemical gets behind ‘Where’s the Net’?

Sumitomo Chemical is supporting an interactive and interfaith campaign launched by the Tony Blair Faith Foundation to raise awareness of malaria across the world.

Until June 2012, the ‘Where’s the Net?’ campaign, led by the Foundation’s Faiths Act, will see symbolic mosquito net displays pass from community to community worldwide. The net’s journey and its stops along the way will place the spotlight on people from diverse faiths and cultures all uniting to take action to end deaths from malaria. 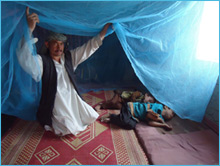 The Olyset Net will be carried by net bearers each representing different nations, faiths, creeds, genders and backgrounds. By bringing these groups together, ‘Where’s the Net’ aims to demonstrate the vital role we all must play in ending malaria, particularly as the Millennium Development Goal of zero malaria deaths by 2015 approaches.

More than twenty five net bearers from five continents will spearhead the campaign and these individuals will mobilise different faith communities through over fifty multi-faith events. One net bearer will take a net to Mount Everest, while another is hosting a rock concert in Argentina.

Sumitomo Chemical will donate a mosquito net to Malaria No More UK for every 10 new people that follow the net’s journey on the Tony Blair Faith Foundation’s social media threads as below.