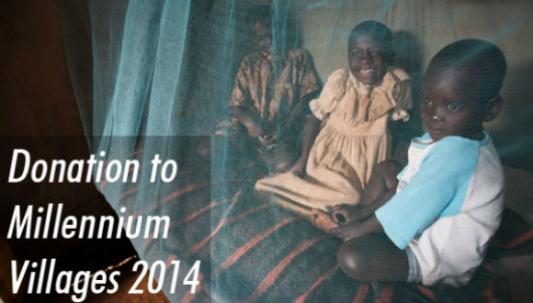 Sumitomo Chemical is proud of our long association with the Millennium Village Project, and takes note of the historic success in reducing malaria deaths of children in Africa, which are now down by half compared with the year 2000. The accomplishments demonstrated in the Millennium Villages built critical momentum toward the global policy of Universal Coverage of bednets – and as the 2013 World Malaria Report shows, the drastic reduction of malaria incidence both in Africa and worldwide can be tracked to this policy.

“Our goal in the Millennium Villages Project is to drive malaria deaths down to near zero as of 2015. Sumitomo Chemical’s new contribution, with all of the energy that it will spur, puts us on the road towards this achievement,” said Jeffrey Sachs, Director of the Earth Institute at Columbia University. “The example set in the Millennium Villages shows that eliminating malaria is on the critical path to eliminating extreme poverty.

Malaria prevents adults from working and children from going to school, locking families and communities into poverty. Poverty hampers treatment and prevention, which leads to further spread of the disease. Using mathematical modeling, economists estimate the economic benefit of continued progress in reducing and eliminating malaria to be more than $208 billion globally between 2013-2035. About 3.3 billion people – half of the world’s population – are at risk of malaria, and every year more than 200 million people are diagnosed with malaria.

Innovative vector control measures, such as Sumitomo Chemical’s Olyset Net and Olyset Plus, help to break this vicious cycle by protecting people from malaria, reducing child mortality, and improving maternal health. As we approach the MDG milestone year of 2015, Sumitomo Chemical remains deeply committed to providing innovative vector control products to fight malaria, and to showing that the attainment of global malaria goals is possible.

To find out more about the Millenium Villages and their Sumitomo Chemical supported bednet campaigns click on the links below: