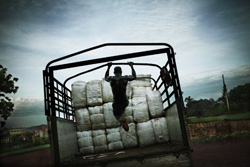 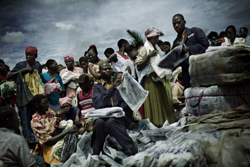 In celebration of World Malaria Day 2009, Sumitomo Chemical is proud to sponsor the London exhibition of “Mauvais Air,” the gallery of William Daniels’ malaria photos. The formal gallery opening taking place in London on Thursday April 23rd will include remarks by a roster of invited dignitaries, including Stephen O’Brien MP (Chair of the All Party Parliamentary Group on Malaria and Shadow Health Minister), Michèle Barzach, (Chair of the Friends of the Global Fund Europe), Professor Awa Marie Coll-Seck (Roll Back Malaria Partnership Executive Director), Mr Tatsuo Mizuno (General Manager, Vector Control Division, Sumitomo Chemical Co. Ltd) and David Cameron MP (Leader of the Conservative Party). Hosted by the Malaria Consortium, the event is sponsored & supported by the European Alliance Against Malaria, Sumitomo Chemical & Friends of the Global Fund Europe.

Sumitomo is delighted to support the Malaria Consortium in its staging of this important exhibition. Each of William Daniels’ powerful images opens a window on the effect of malaria on poor communities in Africa and Asia. In many ways, these photographs reflect the setbacks and victories in the continuing war against malaria. We see the devastation of a mother who has just lost her daughter, but we also see examples of how malaria is being prevented through the distribution of long-lasting insecticidal bed nets.

We at Sumitomo Chemical are committed to making a lasting contribution to the public good in all the communities in which we operate. Malaria prevention is integral to our Corporate Social Responsibility policy. Malaria will only be eradicated by all interested parties working together. Governments, donor organisations, NGOs and the private sector can make great strides in preventing its effects on the world’s most vulnerable communities. The Mauvais Air exhibition will play its part in reinforcing the need for greater effort in fighting the scourge of malaria.

For a complete slideshow of the Mauvais Air exhibit, information on the hard-cover book of the portfolio, and more background on William Daniels, the award-winning photographer who has dedicated years of effort and great talent to portraying the reality of malaria today, please see: http://www.williamdaniels.net/index.php?id=5

The exhibition at the OXO Gallery in London will be open daily between 22nd April and 10th May. Admission is free. 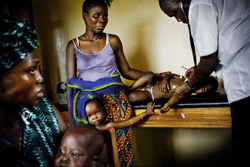 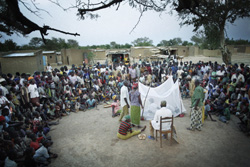 Sumitomo Chemical Commends the Life-Saving Work of Nothing But Nets 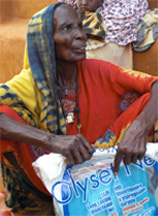 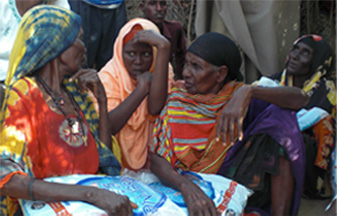 From February 10th-13th, the Nothing But Nets campaign traveled to Dadaab, Kenya to participate in the distribution of the first batch of bed nets that had been obtained specifically for refugees in Kenya. In September 2008, the UN Refugee Agency identified an immediate and urgent need for 275,000 long-lasting, insecticide-treated bed nets (LLINs) for refugees living in 27 camps in Uganda, Sudan, Kenya and Tanzania, where the malaria burden is highest among African camps.

And on February 10th, the Nothing But Nets campaign announced that its supporters successfully raised more than $1.2 million to provide LLINs to more than 273,000 refugees in four camps in Kenya before the summer’s rainy season. The United Nations High Commissioner for Refugees (UNHCR) distributed 128,000 nets in the area.

These pictures were taken in Ifo Refugee Camp on door to door visits with UNHCR and community health workers to distribute the nets to the most vulnerable populations, and provide basic education on malaria and how to use the nets. Additionally, the Nothing But Nets team went into  homes to physically hang the nets.

Dahabo (in the photos) arrived in Ifo 17 years ago – in 1992 with her four daughters.  All are now married and live in the camp. As an elderly woman, Dahabo is vulnerable to malaria and so she received a net from UNHCR on this day. Dahabo said, “I have something to protect me and I will use it nicely and use it well.”

Here is a full blog: http://www.nothingbutnets.net/blogs/report-from-dadaab-kenya.html

And here is the press release: http://www.nothingbutnets.net/media/press-releases/nbn-urj-help-save-lives-kenya.html 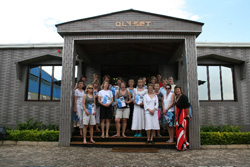 In March, the ”Kili Girls” — a group of 20 ladies from the UK — carried an Olyset Net on a six-day trek and climb up Mount Kilimanjaro. Their aim was to cover the ‘roof of Africa’, as the mountain is known, in order to highlight the problems associated with malaria and to raise funds to buy Olyset Nets.

The Kili Girls were led by Jackie Kerslake, who had heard Professor Sir Richard Feachem talk about malaria and the need to eliminate, if not eradicate, the disease. He had said that it would be truly symbolic to cover Kilimanjaro’s peak with a bednet, and as Olyset Nets are manufactured in the shadow of the mountain, it was even more appropriate to use Olyset for this challenge.

Jackie had firsthand experience of the difference LLINs make to people who live in malarial areas. ”I had the opportunity to visit villages using LLINs and had seen how they helped to improve the quality of their lives. I persuaded my friends that if we were to climb Africa’s biggest mountain that we should also raise money to tackle one of Africa’s biggest problems.”

The ladies battled with the altitude and the vast majority managed the final ascent to the peak, taking an Olyset Net with them to the glacial peak of Uhuru. After successfully completing their climb, they visited the Olyset factory in Arusha to see the nets being made and to hear how the factory employs over 3,000 local people and that demand for nets has led to further expansion of the factory that was opened in February 2008. So far, over $50,000 have been raised through the endeavors of the Kili Ladies, working with the Against Malaria Foundation and A-Z Textiles in Arusha to plan the distribution of the Olyset Nets in Tanzania.