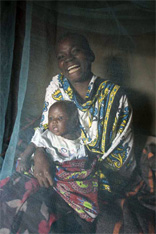 The Global Business Coalition on HIV/AIDS, Tuberculosis and Malaria (GBC)  announced the addition of its first Japanese member, Sumitomo Chemical Co., Ltd., which joins 220 other multinational corporations committed to the private sector response to HIV/AIDS, TB and malaria.  Sumitomo Chemical’s move signals the rising importance of AIDS, tuberculosis and malaria as a business concern around the world and in Japan.

Malaria reduction is clearly the most critical measure of vector control effectiveness. The Earth Institute is rigorously tracking impact data at the 12 Millennium Research Villages across disparate Agro-Ecological zones in Africa. Initial indications from Sauri, which was the first established Millennium Village, located in Kenya’s Nyanza Province, show that the presence of malaria parasites in the blood (parasitemia) of villagers has been reduced by 75%. Olyset ® bednets are part of a comprehensive malaria prevention and treatment approach including improved health facilities, better nutrition, and some clean up of stagnant water sources. In Spring 2005, prior to distribution of Olyset nets to all households in Sauri, pre-program malaria parasitemia was measured at 55%. Repeat testing in December 2006 measured malaria parasitemia at 13%, representing a 75% reduction in the rate of malaria infection. Both surveys were conducted during rainy seasons, but because they were conducted during different months/seasons, follow up studies will take place to obtain parallel data.

The success of the Sumitomo Chemical laboratories in Malaysia, which includes support for development of new public health molecules such as SumiOne (metofluthrin) and the invention of the new termite baiting system Xterm, has led to the decision to upgrade the facility to a fully equipped research and development centre. The upgraded facility in this tropical location will allow greater focus on the further development and support of Sumitomo’s global vector control range, including the Olyset net and Sumilarv products. The Sumitomo Chemical Environmental Health Technology Centre is dedicated to performing research and development of novel chemistry and designing formulations to control a wide range of insect pests that adversely affect the health and environment of people throughout the world. Sumitomo Chemical is proud to announce that in January, 2007 the new centre was certified in full compliance with the requirements of ISO/IEC 17025 and ISO 9001.