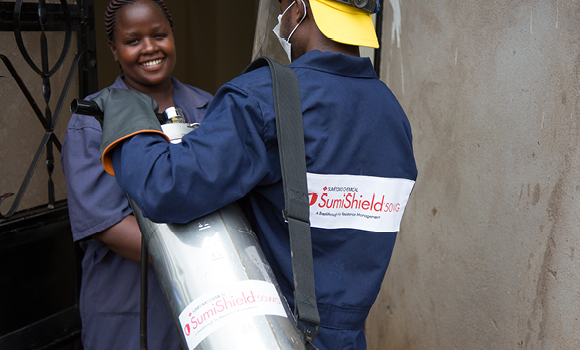 Sumitomo Chemical is delighted to announce that SumiShield® 50WG will now be included in the Next Generation IRS (NgenIRS) project, a vital initiative to increase the use of the latest third generation IRS products (3GIRS) as part of an insecticide resistance management strategy. With a single mode of action chemistry based on the neonicotinoid insecticide, clothianidin, SumiShield® 50WG was prequalified by the World Health Organisation (WHO) in October. SumiShield’s inclusion in the NgenIRS project therefore expands the choice of 3GIRS products available to malaria programmes, enabling them to pre-emptively rotate between chemistries to combat resistance.

Led by IVCC, NgenIRS is a Unitaid-funded programme, operating in partnership with the President’s Malaria Initiative (PMI), Abt Associates, PATH and The Global Fund. The four-year, $65.1 million project is addressing the factors that are hindering wide-scale use of new, longer-lasting and resistance-breaking insecticides, such as high prices and lack of market stability.

Over the short term a Unitaid-funded co-payment allows malaria programmes to immediately purchase 3GIRS products at a more mature market price. This makes it more affordable for programmes to incorporate 3GIRS products into their rotation strategies to fight resistance. Despite its effectiveness in combating malaria, IRS use in Africa had dramatically fallen since 2010 due to wide-spread resistance to older insecticides combined with the high cost of 3GIRS.  Thanks to the NgenIRS project which was launched in 2016, this trend has begun to reverse as malaria programmes and their partners are now able to access new products at more affordable prices.

NgenIRS also gives manufacturers, such as Sumitomo Chemical, the confidence to scale production of new anti-malarial insecticides, by introducing greater predictability and stability into the market by providing annual volume guarantees in return for discounted pricing.  The combination of interventions under NgenIRS will facilitate sustainable cost reductions by enabling the development of large-scale distribution infrastructure, improved forecasting and greater efficiency in the supply chain. SumiShield® 50WG joins Actellic® 300CS as the second product eligible for NgenIRS support.

Ms Atsuko Hirooka, Executive Officer, Environmental Health at Sumitomo Chemical said: “Sumitomo Chemical is delighted that SumiShield is now included in the NgenIRS project which will facilitate the wider use of third generation IRS in malaria affected areas and allow countries to implement the core principles of GPIRM (Global Plan for Insecticide Resistance Management) more effectively.”

Watch a short film of IVCC members discussing the impact of SumiShield® 50WG.

More information on SumiShield® 50WG can be found here.

® SumiShield is a registered trademark of Sumitomo Chemical Company Ltd.