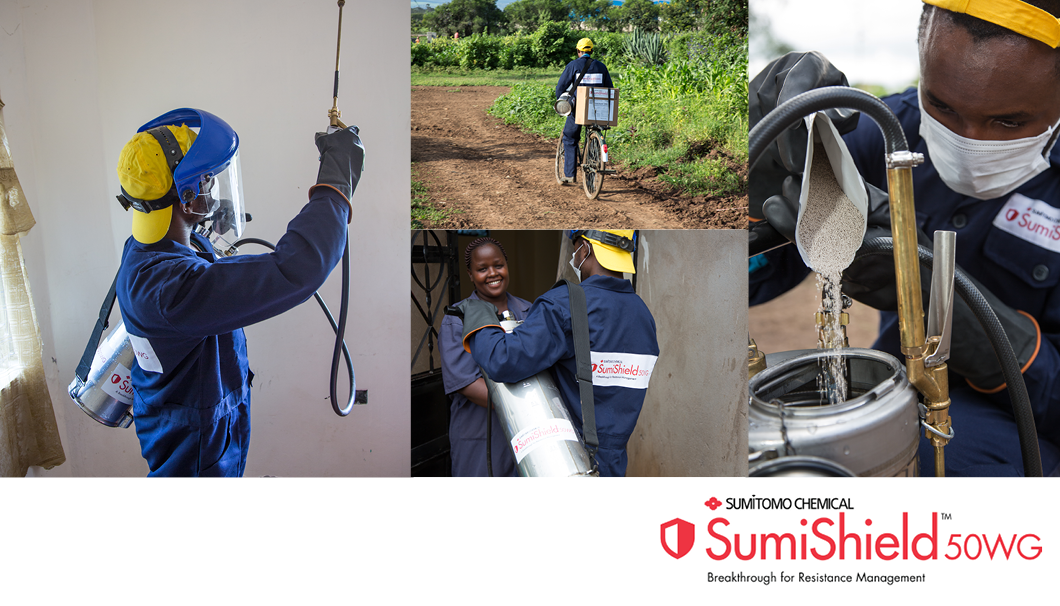 SumiShield 50WG, which contains a new mode of action chemistry for indoor residual spraying, represents a critical breakthrough in the fight against insecticide resistance. Find out why it’s so effective in our new video:

Sumitomo Chemical has developed an indoor residual spray (IRS), with a new mode of action chemistry based on the neonicotinoid insecticide clothianidin, designed to help combat insecticide resistance. Benefiting from a non-repellent formulation and low mammalian toxicity, SumiShield 50WG is simple to use and has light-weight packaging for easy transportation.

Insecticide resistance is one of the major issues facing the global fight against malaria, affecting 75% of countries with ongoing transmission of the disease. Rotating insecticides is one of the key strategies for avoiding resistance, however nearly 90% of affected countries are failing to do this, largely due to a lack of choice.

Its non-repellent formula means resting mosquitoes can be exposed to SumiShield 50WG for longer than many other insecticides, increasing mortality and reducing the chances of resistance developing. Field trials have also shown SumiShield 50WG has a residual efficacy of at least 6 months after spraying.

Packaged in 150g sachets, SumiShield is a free flowing water dispersible granule or WG which can be readily shipped by air or sea and put on the back of a bike for easy and efficient delivery to villages. SumiShield has low mammalian toxicity through skin contact and is practically non-toxic to bird and aquatic life.

Our video explains the significance of this new breakthrough in the fight against malaria and what makes SumiShield 50WG so effective. Watch it now here.

® SumiShield is a registered trademark of Sumitomo Chemical Company Ltd.