Reflections on the Value of Vector Control 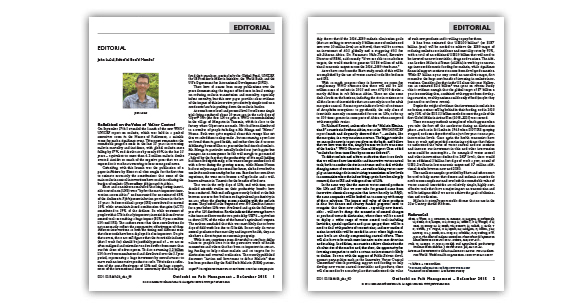 On September 17th I attended the launch of the new WHO/UNICEF report on malaria, which was held in a packed committee room in the Houses of Parliament, a suitable venue for such a significant event. This report summarizes the remarkable progress made in the last 15 years in reversing malaria mortality and incidence, with global malaria cases falling by 37% and death rates by nearly 60% in the last 15 years – equivalent to more than 6.2 million malaria deaths averted. Amidst so much of the negative press that we are exposed to it was heart-warming to hear some good news.

Coinciding with this launch was the publication of a paper in Nature  by Bhatt et al. that sought for the first time to estimate accurately the contributions that some of the main malaria control interventions have made in reducing the burden of malaria (Plasmodium falciparum ) in Africa.

Bhatt and co-authors concluded that long lasting insecticide treated nets (LNS) were “by far the most important intervention across Africa” and accounted for an estimated 68% of the declines in P.falciparum  infection prevalence in the last 15 years. Indoor residual sprays (IRS) contributed to around 13% while artemisinin-based combination therapies (ACTs) contributed to 19% of the declines. So while treatment of people with ACTs is clearly important, insecticide-based vector control tools are making a huge impact (81% if you combine LNs and IRS). The authors stress that these contributions do not necessarily reflect the comparative effectiveness of these different interventions as both the timing and different scale that these tools have been deployed is also important. Despite that caveat, these are still figures that the insecticide industry (that I work for) should be justifiably proud of – we are so often maligned and misunderstood and suffer from more than our fair share of adverse press. To date a stunning 1.2 billion LNs have been manufactured and distributed over the 15 year period, representing a huge investment by manufacturers to move such an innovative product to scale. This is also a reflection of the cost-effectiveness of LNs and the huge commitment of the international donor community that has helped fund their purchase, particularly the Global Fund, UNICEF, the US President’s Malaria Initiative, the World Bank, and the UK’s Department for International Development (DFID).

There have of course been many publications over the years demonstrating the impact of bed nets in local settings on reducing malaria transmission and mortality, especially infant mortality, but this new paper provides clear evidence of the impact of this innovative yet relatively simple tool on a continental scale  in pushing down the malaria burden.

At a much more local and personal level I recall some simple trials being conducted about 10 years ago, in the early days of Olyset®  Net (the first LN to gain a WHO recommendation) in the village of Manyatta in Tanzania, which is close to the factory where Olyset nets are made. Nets had been distributed to a number of people including a Mr. Manga and “Mama” Neema. Both were quite sceptical about this strange blue net that we asked them to sleep under – but on returning a year later we found them in good health, and rather than the 4 or more debilitating bouts of illness a year neither had since had malaria. Mr. Manga in particular actually looked not just happier but younger! As a consequence he felt well enough to get married – helped by the fact that the productivity of his small holding had increased significantly, as he was no longer confined to bed with a fever during the growing season, while Mama Neema had not only managed to extend her house, she had even built a one-bedroom home nearby for her son. Based on her own direct experience, she went on to become a village leader and a wellknown advocate in Tanzania for the benefits of bed nets.

That was in the early days of LNs, and with time, more detailed scientific studies on their productivity benefits have been conducted. Fink and colleagues recently looked at the link between access to free bed nets and agricultural productivity in an area where the planting season coincides with the malaria season. They looked at the outputs of over 500 Zambian farmers for a year before LNs were distributed and again the following year after LN distribution. Results indicated that average harvest value increased between the two periods by US$76 – equivalent to about 15% of the value of the farmer’s agricultural outputs. The authors concluded that this was most likely due to fewer days of field work lost due to ill health. So not only do vector control products reduce mortality and improve health, they can also have a direct impact on economic prosperity.

While it can sometimes seem distasteful to attribute dollar values to people’s lives it is the persuasive work of health economists and others that has been so important in attracting funding to help reduce malaria and set targets for its elimination and eventual eradication. The recently published document “Action and Investment to defeat Malaria” that has been produced by the Roll Back Malaria (RBM) partnership shows that if the 2016–2030 malaria elimination goals (that are seeking to avert nearly 3 billion cases of malaria and save over 10 million lives) are achieved, there will be a return on investment of 40:1 globally and a staggering 60:1 for sub-Saharan Africa. Dr. Fatoumata Nafo-Traoré, Executive Director of RBM, said recently “If we are able to reach these targets, the world stands to generate US $4 trillion of additional economic output across the 2016–2030 timeframe.”

As we have seen from the Bhatt study, much of this will be accomplished by the use of vector control tools like bed nets and IRS.

With so much progress there is however no room for complacency. WHO estimates that there will still be 214 million cases of malaria in 2015 and over 470,000 deaths – mostly children in sub Saharan Africa. There are also some dark clouds on the horizon, including the rise in resistance to all the classes of insecticides that are currently in use for adult mosquito control. Recent reports indicate levels of resistance of Anopheles  mosquitoes to pyrethroids, the only class of insecticide currently recommended for use on LNs, to be up to 300 times greater in some parts of Africa when compared with susceptible strains.

Dr. Richard Kamwi, ambassador for the “Malaria Elimination 8” countries in Southern Africa, was at the WHO/UNICEF report launch and eloquently observed that “….malaria, like the mosquito, is a very tenacious creature. The biggest mistake we can make now is to pat ourselves on the back, and believe that we have won the war, simply because we have won some of the battles.” WHO Director General Margaret Chan added “malaria has been tamed but by no means defeated”.

To defeat malaria and achieve eradication there is no doubt that we will need new insecticides and innovative vector control tools, both to combat the rise in resistance and to deal with the changing nature of transmission – as outdoor biting vectors now play an increasing role in maintaining transmission at low levels in communities where the indoor biting species have been largely removed, due to IRS and widespread use of LNs.

In the same way that the current vector control products like LNs and IRS that we now take for granted came from innovative chemical companies that invest heavily in R&D, the same companies will be looked on to come up with many of these solutions. The impact and value of these products is clear but donors and country funded programs need to recognise that these new solutions – especially new insecticides – will not be cheap: the economics of control changes as you head towards elimination, where there will be a need to deploy a wider range of vector control tools including larvicides, spatial repellents and space sprays; there will be a need to deal with pockets of transmission; and new modes of action insecticides will be needed in areas where high resistance levels are already compromising control efforts. There will also have to be much more intensive active case detection and tracking. In addition, as countries achieve elimination the absolute size of the market and, therefore, the opportunity for investing companies to make a return on investment is likely to decline. So even with the support of Public-Private development partnerships such as the Innovative Vector Control Consortium1 that is providing support and funding to help develop new vector control insecticides and products, there will also need to be a marketplace that understands the value of such new products and is willing to pay for them.

It has been estimated that US$100 billion* (or $US7 billion /year) will be needed to achieve the 2030 target of reducing malaria case incidence and mortality rates by 90%, with a total of an additional US$10 billion that will need to be invested on new insecticides, drugs and vaccines. The African Leaders Malaria Alliance (ALMA) is working to encourage increased domestic funding for malaria, while significant financial support continues to come from developed countries. While $7 billion a year may sound an unrealistic target, first remember the huge cost benefit of investing in malaria interventions. Consider also that in the US alone this past Halloween an estimated $2.6 billion2  was spent on sweets! Surely this is evidence enough that the global target of $7 billion a year is something that, combined with support from developing countries, wealthy nations could easily afford (maybe they just need to eat fewer sweets).

Despite the weight of evidence that investment in malaria is a no brainer, nations still lag behind in their funding, and in 2013 only 52% of the $US 5.1 billion needed to meet the goals of the first Global Malaria Action Plan (2008–2015) was secured.

There are many textbook examples of what happens when you take the foot off the accelerator during an elimination phase – such as in Sri Lanka in 1963 when DDT IRS spraying stopped, and cases skyrocketed in a just few years to near preintervention levels. Once again the health economists have been at work and provided convincing evidence that failure to understand the value of vector control and not continue and increase our investment in this and other intervention areas could be catastrophic – for example if vector control and other interventions declined to 2007 levels, there would be an additional 1 billion lost days of work a year, a total of US$1.2 trillion in lost economic output and 3.7 million additional deaths between now and 2030.

The excellent examples provided by Bhatt and others must be used to help ensure that donors and endemic countries do not become complacent and overlook the remarkable value of vector control: insecticides are relatively simple, highly costeffective tools that have a major impact on transmission and will be indispensable if we are to achieve the goals of elimination and eradication.

Malaria is a totally preventable disease that no one in the 21st Century should die from.

(2015) The effect of malaria control on Plasmodium falciparum in