For nearly a decade, World Malaria Day has provided an important focus for the global fight against the disease which continues to kill more than 400,000 people every year. One of the world’s vital annual public health campaigns, 25 April is a chance for the malaria community to come together, shining a spotlight on the need for continued investment, research and development and sustained political commitment to malaria prevention and eventual elimination.

This year’s theme, End Malaria for Good, aims to renew the drive for preventative measures that have already played such a major part in reducing cases and deaths of malaria. Long lasting insecticidal nets and indoor spraying with insecticides caused new malaria cases to fall by 21% and malaria death rates by 29% between 2010 and 2015, while death rates have fallen by a very impressive 48% overall since 2000. Crucially over half (53%) of the at-risk population in Sub-Saharan Africa slept under an Insecticide Treated Net in 2015, compared to just 30% in 2010 and as few as 2% at the turn of the millennium.

One of the leading innovations in the fight against malaria, the Olyset® Net is celebrating 15 years in production this year, giving us an additional reason to reflect on the enormous progress made during that time. The first long-lasting insecticide net (LLIN) to receive WHO recommendation back in 2002, nearly 300 million Olyset Nets have been delivered worldwide since production started in 2002, reaching over 80 countries. The impact of prevention has been staggering, with estimates that it has single-handedly saved 560,000 lives around the globe[1]. 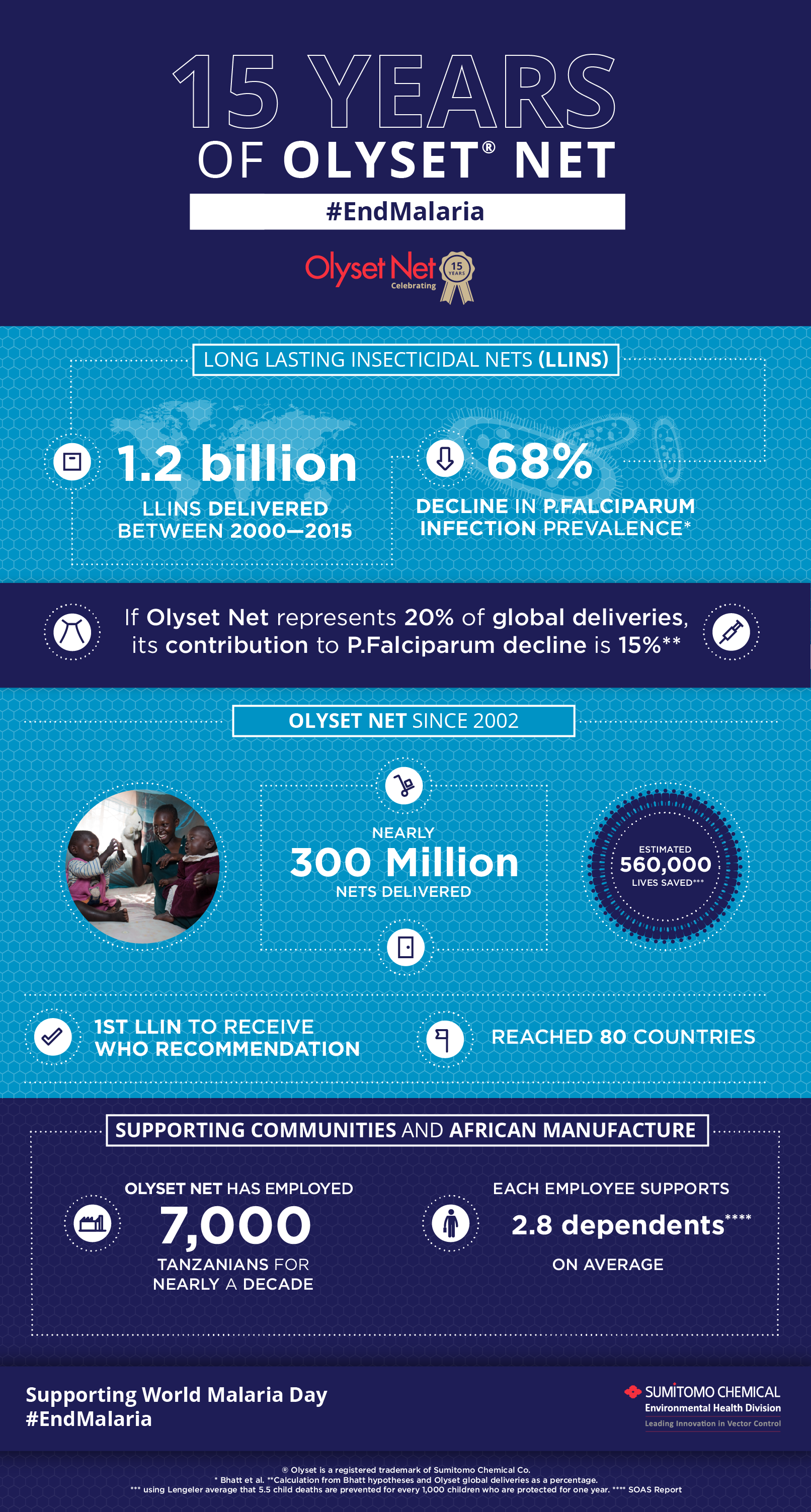 Alongside its preventative benefits, the Olyset Net has also brought jobs and economic development to Tanzania, where it has been manufactured since 2003. Sumitomo Chemical firmly believes that, to be sustainable, the nets must be manufactured where they are needed most, in Africa. Since opening the factory has employed 7,000 Tanzanians, each with an average of 2.8 dependents[2]. It’s an inspiring example of how providing a public health product can simultaneously boost the local economy.

The entire malaria community has reason to be proud of the progress made but there is no room for complacency. With WHO’s global target of reducing current malaria case rates by 40% only three years’ away, fewer than half of the world’s 91 affected countries are on track, with many low-income countries falling behind. Meanwhile WHO estimates that 3.2 billion people are still at risk of malaria around the world.

The Olyset Net has shown what is possible when investment is channelled into the right research and development, while involving local communities. But the fight against malaria is far from over. This World Malaria Day, it’s time to call again for more investment, more education and more awareness, so we can hit those 2020 targets, achieve the more ambitious target of a 90% reduction by 2030, and move closer to a day when malaria is no longer a threat.