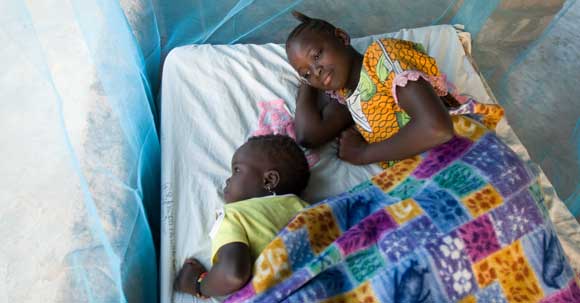 Perhaps the greatest intervention in history against malaria has been Long Lasting Insecticidal Nets (LLINs), which have dramatically reduced malaria globally and especially in Africa since their introduction. It is estimated that 68% of the 663 million cases averted since 2000 have been due to LLINs. Their impact has been greater even than the use of malaria drugs. (Bhatt et. al.2015[1]). However these massive gains against malaria are at risk. The only insecticide used on nets to date has been pyrethroids and mosquitoes have now developed resistance to this group of compounds. The high levels of resistance in some areas of Africa mean that even doses > x100 the dosage required to kill a susceptible insect no longer work!

Insecticide resistance in mosquitoes has severely affected the performance of LLINs in standardized laboratory bioassays. In Kenya, pyrethroid-resistant mosquitoes were found resting inside holed LLINs and, when tested by cone bioassays, these LLINs were also found to be ineffective at killing local vectors, linking resistance strength with increases in malaria (Toé, KH et al., 2014[2]).

This means LLINs are not achieving the same impact they used to and the gains made in malaria reduction could be threatened and even reversed.

What is the alternative? Sumitomo Chemical recognised the problem and introduced Olyset® Plus. This net contains permethrin but also piperonyl butoxide (PBO) which is not an insecticide but a synergist. In the case of resistant mosquitoes which exhibit metabolic resistance this enables them to over express enzymes to metabolise the insecticide. PBO blocks these enzymes and restores pyrethroid activity.

A recent study published by Churcher, T, et al 2016[3] conducted a meta- analysis of bioassay studies and experimental hut studies and concluded that, while first generation pyrethroid only nets initially provided substantial personal protection when they were new, efficacy quickly declined against resistant mosquitoes as nets aged. The paper demonstrated that even low levels of resistance would increase the incidence of malaria due to reduced mosquito mortality and lower community protection. Churcher et al. predicted that in areas with high levels of resistance switching to PBO nets would avert up to 0.5 clinical cases per 1000 people per year compared with using standard non-PBO nets.  Another important point made in this paper was that in some cases if resistance is ignored and levels rise further then PBO nets would have less impact, in other words `better to act sooner rather than later against resistance.`

The technology of having sufficient PBO on the nets and obtaining co evolution of the insecticide and PBO at correct rates and for the life of the net is very difficult but Sumitomo Chemical has been able to achieve this with the Olyset Plus net.

While the PBO nets cost a little more than standard nets there must be a cost-benefit gain in avoiding clinical cases that require expensive drugs for treatment and in severe cases even hospitalisation.

There is currently an appetite for cheaper and cheaper pyrethroid only nets. While this is good for coverage levels these nets have had reduced impact in many places where resistance is well established and their continued use can even increase the levels of resistance.

Sumitomo Chemical`s Olyset Plus contains the pyrethroid permethrin which has very low irritancy to, or side effects on, people compared with other pyrethroids such as deltamethrin. It also has PBO on all five surfaces of the net to ensure that the resistant mosquito cannot avoid the treated surface. The time has come to make proper use of PBO nets and tackle resistance before malaria rates rise again and threaten to reverse the gains made so far towards the elimination and ultimate eradication of malaria.