Olyset® Plus – The Next Generation Net with Added Protection

The original ‘Olyset® Net’ remains one of the most effective LLINs on the market, but Sumitomo Chemical recognised that, for some markets, improvement could be made in the speed of action and efficacy against both susceptible and resistant mosquitoes. ‘Olyset Plus‘, which received WHO recommendation in July 2012, complements Olyset Net; retaining the latter’s ground-breaking controlled-release technology and durability, but introducing a number of new features, including the addition of PBO (piperonyl butoxide). 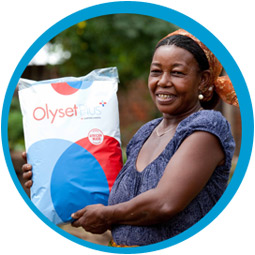 PBO, a synergist with low mammalian toxicity, has long been used to improve the performance of pyrethroid insecticides. Olyset Plus’ polyethylene netting contains 2% permethrin combined with 1% of PBO, which is incorporated into every fibre, on all sides of the net, a first for the LLIN market. The fibres have been designed to release the two ingredients at a constant ratio of 2:1, thus ensuring enhanced efficacy against all mosquitoes for the life of the net.

In areas where resistant mosquitoes have been found, rapid regeneration after washing and, therefore, the provision of an almost continuously available insecticide plus PBO barrier, is required to maximise the protective effect. To this end, the ‘bleed rate’ at which permethrin and PBO migrate from the internal reservoir in the fibre to the surface of the net has been adjusted in Olyset Plus to provide rapid regeneration. This makes the net active again within 1-2 days of washing.

Tatsuo Mizuno, General Manager of the Vector Control Division at Sumitomo Chemical said: “Olyset Net will continue to be a key weapon in the fight against malaria, but our development of Olyset Plus will enable us to save more lives and improve the quality of life for malaria endemic communities affected by insecticide resistance.“