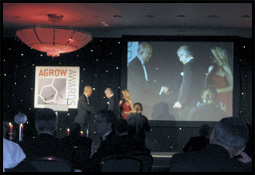 Sumitomo Chemical’s Olyset Net Chief Specialist Dr. Takaaki Itoh said: “We are delighted that Olyset Net has been recognised by Agrow. Malaria is arguably one of the most significant contributors to poverty in sub-Saharan Africa: its affect on rural communities is devastating. Aside from the tragic loss of life, particularly among young children, the incidence of malaria has a direct influence on economic development – for example, if a farmer is struck down by the disease, he cannot work his land and feed his family.

“The containment and eventual elimination of malaria is integral to Millennium Development Goals 1 and 6 – respectively the eradication of extreme poverty and hunger, and combating malaria, HIV and other diseases. To these ends, Sumitomo Chemical is committed to ensuring that Olyset Net is made available – as quickly as possible and at the lowest possible cost – to those who need it most. That’s why Sumitomo Chemical has established Olyset Net manufacturing facilities in sub-Saharan Africa. Nearly half of global net production is made in Africa, by Africans and for Africans.”