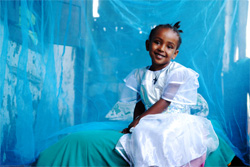 The facility, based in Kombolcha in north-central Ethiopia, has created 300 jobs. The work involves stitching Olyset netting to produce finished nets which will be purchased by the Ethiopian Ministry of Health for distribution in the country. It is expected that the Kombolcha facility, which opens formally on 27 June 2009, will produce around three million nets in its first year of operation. 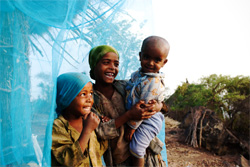 Sumitomo Chemical’s decision to produce Olyset Nets in Ethiopia exemplifies its commitment to ensuring that Olyset is made in Africa, by Africans, for Africans. To this end, Sumitomo Chemical has, since 2003, been working in partnership with A to Z Textiles, a major textile manufacturer in Tanzania.

Sumitomo Chemical’s 50/50 joint venture with Arusha-based A to Z Textiles is now producing 20 million finished Olyset Nets per annum – approximately 50% of global Olyset Net production. The partnership’s purpose-built factory, opened in February 2008, is currently employing 4,000 people and this figure will rise to 6,000 by the end of 2009. Earnings of the Arusha factory workers support a further 20,000 local people.

The intention is to replicate large scale Olyset Net production in other sub-Saharan countries and Sumitomo Chemical has recently committed to establishing a Nigeria-based factory. 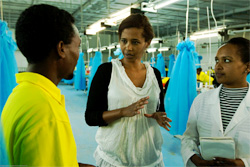 Tatsuo Mizuno, General Manager – Vector Control Division, Sumitomo Chemical Company Limited, said: ”Net manufacturing in Africa ensures maximum benefits for Africans. Olyset Nets can be distributed more quickly to those who need them most and it provides the security of long-term employment for local people. We are very pleased to be working in partnership with Ethiopia’s WCT and in starting a new chapter of Olyset Net’s ‘made in Africa’ story.”