Olyset Net at the African Cup of Nations 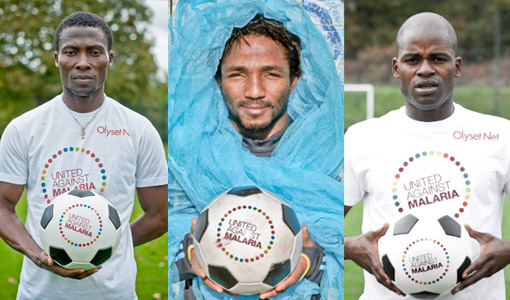 Luanda, ANGOLA (January 7, 2010): As the country prepares to kick off the African Cup of Nations later this week, partners and supporters of the United Against Malaria campaign joined together in Luanda to launch several Public Service Announcements (PSAs), featuring an array of pan-African football stars, and United Against Malaria’s youth ambassador, Charles Ssali. 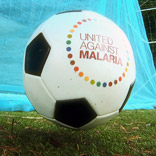 United Against Malaria works to leverage the incredible power of football, the world’s most popular sport, to shine a spotlight on the malaria crisis in Africa in the lead up, later in 2010, to the first World Cup on African soil. Partners in Angola rallied this week to show their support for United Against Malaria. The Angolan Ministers of Health and Ministers of Youth and Sports joined with campaign partners Sumitomo Chemical and ExxonMobil, as well as several top African footballers, to discuss malaria and announce United Against Malaria’s African PSAs.

The initial 10 spots to be released feature:

“We are proud that so many African football stars have given generously of their time and invoked their spirit of play in the Palufoot campaign,” said Tatsuo Mizuno, General Manager of Sumitomo Chemical’s Vector Control Division. “In this crucial year, many African communities are receiving bednets for the first time through Universal Coverage campaigns. Behavior change communication, such as Palufoot, which shows the power of bednets in an amusing and yet memorable way, is essential.”

Malaria is a devastating disease even though it is entirely treatable and preventable. Half of the world’s population is at risk of contracting malaria and there are nearly one million malaria related deaths each year. Malaria disproportionately affects people on the African continent but concentrated efforts have reduced malaria deaths by more than 50 percent in countries like Eritrea, Rwanda, and Zambia. A comprehensive approach, including the use of mosquito nets, indoor residual spraying, and effective medicines like artemisinin-based combination therapies, can help African countries effectively tackle malaria within their borders and across the continent to meet the UN goal of ending malaria deaths by 2015.

The Sumitomo Chemical “Palufoot” PSAs will be released early January 2010 in preparation for the Africa Cup of Nations, and will be broadcast in collaboration with:

The entire series will be made available again to all of the above for broadcast during the World Cup in June and July 2010.

Additional information on United Against Malaria
United Against Malaria is a partnership of football teams and heroes, celebrities, health and advocacy organizations, governments, corporations, and people like you who have united ahead of the 2010 World Cup in South Africa to win the fight against malaria. Our goal is to galvanize partners throughout the world to reach the United Nations target of universal access to mosquito nets and malaria medicine in Africa by the end of 2010, a crucial first step to reaching the international target of reducing deaths to near zero by 2015. www.UnitedAgainstMalaria.org