‘Me and My Net’ Wrap-Up Event

Olyset Net/Sumitomo has hosted an event with the Royal Commonwealth Society to close the first stage of its ‘Me and My Net’ competition and malaria awareness initiative. The event was also an opportunity to hear from the competition winner, 15 year old Siya Kulkarni, born in Mumbai, brought up in Delhi and now living in Shenzhen, China. 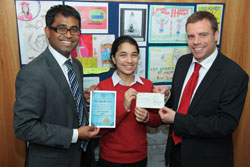 The competition was designed to engage with young people across the world to gauge attitudes and awareness around malaria prevention and net usage. This information will be used to shape future net education campaigns.

Over 2,100 entries were received from 25 countries and 167 schools and after review by a judging panel which included Sarah Kline, executive director of Malaria No More, Siya’s entry was chosen as the winning one. The next stage of the initiative is to collate information from the entries to be shared with key malaria organisations, youth groups and charities so that the competition leaves a positive legacy.

Siya spoke at the event about what moved her to enter the competition. She said: “Although I come from India I was very ignorant about the impact that malaria has upon people in affected areas and was shocked by the scale of the problem. I was also struck by how easy it is to protect people with a net as opposed to using sprays or drugs. It is such a simple solution and yet, as a young person, I also know that we do not like being told what to do. I knew that my campaign had to find incentives for young people as a way to engage with them and encourage them to use their nets.

“I decided to split my Kids for Nets campaign to appeal to two age groups and used rhymes and the idea of decorating their nets to engage the 4-10 year-olds; whilst I wanted to show the young adult 11-15 year-olds that their future health and, therefore, their dreams for their future could be threatened.”

The event was attended by members of the malaria community who also got to see a selection of finalists’ entries which were on display. Entries were in essay, drawing or other creative formats.

The Commonwealth Nurses Federation also made a donation to Siya, which will be used to purchase Olyset Nets for distribution in Tanzania.