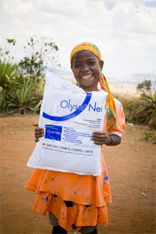 ALL CHILDREN UNDER FIVE IN MADAGASCAR TO SLEEP UNDER BED NETS

(New York, 18 October 2007) — Malaria No More and Sumitomo Chemical have teamed up to contribute to the distribution of 1.4 million bed nets to children in Madagascar between October 22-29.

Led by the Malagasy government, the campaign will ensure that virtually every child aged six months to five years old receives a bed net. Sumitomo Chemical donated 110,000 long-lasting insecticide-treated Olyset nets to the distribution. Through the support of Idol Gives Back and The Charity Projects Entertainment Fund, Malaria No More is funding education, distribution, and logistical support associated with the nets. Additional partners in the campaign include the U.S. President’s Malaria Initiative, UNICEF, and Red Cross of America and Canada.

Malaria kills more African children than any other disease—approximately 3,000 every day. It is endemic to 90 percent of Madagascar, where it is the number one cause of death among children. Madagascar’s under-5 mortality rate, 124 deaths for every 1,000 live births, is more than 15-times that of the United States.

“Malaria imposes a terrible cost on the lives and livelihoods of people in Madagascar,” said John Bridgeland, Vice Chair of Malaria No More. “A $10 long-lasting insecticide-treated bed net is often all it takes to save a child’s life.”

Sumitomo Chemical’s revolutionary Olyset technology has transformed malaria control by incorporating insecticide into the fibers of nets, ensuring that they remain effective for at least five years. Olyset nets are tear-resistant, wash-proof, and never require treatment, making them ideal for difficult-to-reach regions like Madagascar’s Central Highlands regions where they will be distributed this week.

“The real test of any bed net is malaria prevention,” said Tatsuo Mizuno, General Manager of Vector Control in Sumitomo Chemical’s Environmental Health Division. “The extreme durability of Olyset nets will protect the Central Highlands residents for a minimum of five years.”

The bed net distribution is part of an integrated Measles Initiative campaign that will also distribute measles and polio vaccines, Vitamin A supplements, and de-worming pills to children. According to a recent UNICEF report, child mortality has reached a record low, dropping below 10 million deaths worldwide (to 9.7 million), down from almost 13 million in 1990. Efforts to combat malaria and measles have played a significant role in that decline.

ABOUT MALARIA NO MORE

Malaria No More’s mission is simple: to end deaths due to malaria. The world has known how to beat this disease for more than a century, yet it remains the number one killer of children under five in Africa, claiming more than 1 million lives a year. Malaria No More works to raise the profile of the disease among the public, policymakers, and businesses, while engaging the private sector to provide life-saving bed nets and other critical interventions to families in Africa.

Sumitomo Chemical is multi-national Japanese company, with decades of experience in insecticide manufacturing and plastics technology. Dedicated to solving environmental and social problems through innovative technology and sustainable development, Sumitomo Chemical believes the cycle of poverty can be broken by the prevention of vector-borne diseases. As Olyset has been proven to be the most cost-effective malaria intervention today, Sumitomo Chemical is working to ensure this technology reaches those in need through provision of donated or low-cost nets, and through participation in a 50/50 joint venture for local African manufacture of Olyset.