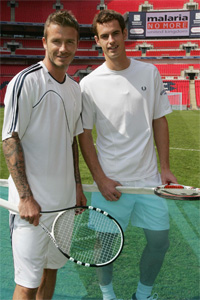 Two of the UK’s top sporting heroes England international footballer, David Beckham, and Britain’s top tennis player, Andy Murray, took centre stage at Wembley Stadium, to mark the launch of Malaria No More UK — a not-for-profit organisation, committed to ending suffering and death caused by malaria, a preventable disease. The event took place on the same day as their meeting with Prime Minister Gordon Brown at No. 10 Downing Street.

Beckham and Murray are members of the Malaria No More UK Leadership Council and played against one another at the world famous Wembley Stadium for a-once-in-a-lifetime sporting moment. They played football tennis, normal tennis, and ‘keepie uppies’ with footballs and tennis balls over the world’s longest tennis net spanning 68 metres, produced out of Olyset Nets. They moved onto football and took turns to take free kicks into the first ever blue mosquito goal net. While Andy passed on a few tennis tips to David, David let Andy into a few secrets on how to take the perfect free kick. The games symbolised the urgent need for bed nets for those who die from malaria.