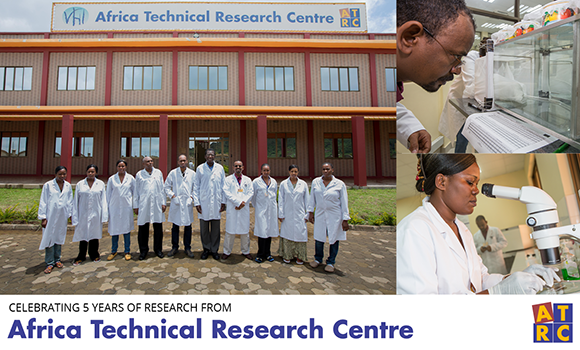 Today marks the five-year anniversary of the Africa Technical Research Centre (ATRC) in Arusha, Tanzania. Belonging to Vector Health International, a joint venture between Sumitomo Chemical Company (SCC) and AtoZ Textile Mills Ltd, the R&D facility ATRC has played a central role in the fight against malaria, insecticide resistance and in improving food security in Africa, while also supporting the local Tanzanian economy.

The partnership between SCC and AtoZ began in 2003, with a technology transfer agreement for the royalty free manufacture of Olyset® LLINs (Long Lasting Insecticidal Nets) in Tanzania. Production began in 2003, with a capacity of 300,000 nets per year, rising to 30 million just a few years later. The partnership has saved and continues to save millions of lives across Africa, creating around 7,000 jobs in the process.

But despite the huge strides forward, the Joint Venture – Vector Health International (VHI) – soon became aware of the growing challenge of insecticide resistance, alongside the issue of food security in Africa. It concluded that continuous research and development was the key to tackling these issues, making the landmark decision to set up the research centre for exactly this purpose.

Ground breaking and construction of the ATRC facility began in 2011, with the first member of staff, Founding Director, Dr. Johnson Ouma Odera, hired the same year. The largest of its kind in East and Central Africa, the centre was officially inaugurated on 29th June 2012, with a dual mandate to develop technologies for public health and agriculture.

In just five years – a relatively short time in R&D – ATRC has become an exemplar to Africa and the world, with state of the art laboratories and a 15-strong team of scientists and technical staff. Its facilities have been expanded with the construction of a new insectary for the housing and breeding of resistance strains of mosquitoes, as well as experimental huts for testing new LLIN and Indoor Residual Spraying (IRS) products. It has also been ISO 9001:2015 certified, which is a testament to its quality control and operational management.

Working in close collaboration with SCC and AtoZ, ATRC has developed a number of new generation vector control and agricultural products, some of which are already being commercialised, or will soon go to market. The vector control products, developed at the centre include: SumiShield® a new mode of action and long lasting IRS product and SumiLarv® 2MR a novel matrix release long lasting larvicide for container breeding mosquitoes, a key component in dengue control. Agricultural products have focused on the protection and hermetic storage of cultivated crops

The location of ATRC has strategic importance, allowing it to align its work with local needs, values and conditions, and to allow the easy transfer of its technologies for manufacturing locally. It also represents valuable opportunities for local talent – >90% of staff are from within Africa – helping to prevent the ‘African brain drain’, and indirectly supporting the extended families of its staff. It has also helped inspire the next generation of scientists, training several student interns from middle-level colleges and universities.

Looking to the future, ATRC is positioning itself to become a key player in the development of insecticide resistance (IR) management tools, by building in-house capacity for product formulation and molecular biology to monitor IR. It also aims to develop a greater focus on agriculture related technologies to help solve Africa’s food security challenges, facilitate an open innovation and technology park initiative and continue to establish and expand its strategic partnerships.

Senior management at Sumitomo, VHI and AtoZ are extremely proud of the success of ATRC and remain committed to supporting R&D in Africa for many years to come.

Mr Ray Nishimoto, Representative Director and Senior Managing Executive Officer, President of Health and Crop Sciences Sector at Sumitomo Chemical praises the progress made; “After 100 years of business experience, we at Sumitomo Chemical know well the lengthy lead times involved in research and development so the scale up and growth of ATRC and the launching of two ground breaking vector control products in just five short years is particularly pleasing and testament to the talent at ATRC. This start makes for an exciting future for ATRC.”