Those of you who have seen my previous blogs know that I’ve been championing sustainability – specifically the need for development policy and related initiatives to be directed at securing sustainable long-term economic and social benefits.

As I mentioned in my most recent blog, Vector Health International (VHI) – the 50-50 joint venture between Sumitomo Chemical and Arusha-based A to Z Textiles – has complemented its large-scale bed net manufacturing operation with the establishment of a purpose-built R&D facility.

VHI’s Africa Technical Research Centre (ATRC), which opened in 2012, is the largest R&D centre of its kind in East and Central Africa.  Its three units – Vector Biology and Control, Agronomy and Analytical Chemistry – focus on the development of innovative agricultural and public health consumer products.  Equipped with insect-rearing and insecticide testing facilities, ATRC also has a molecular biology lab which is used to identify species of malaria-carrying mosquitoes and assess different types of malaria resistance. 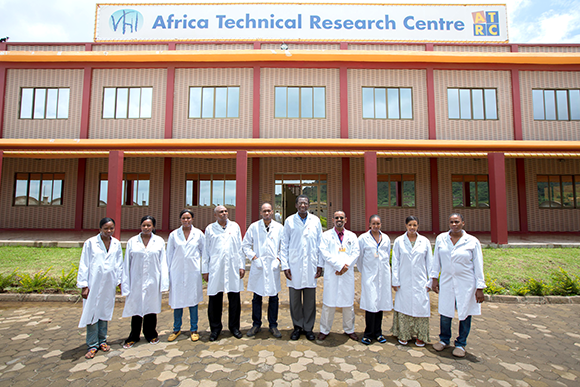 As with the net production plant, the rationale behind the ATRC is sustainability.  Its mandate is to improve the quality of people’s lives in the long term through the continuous development of innovative pest control products, procedures and services.  The emphasis is on adding value, increasing operational efficiency and cost reduction.

Of course, Sumitomo Chemical has major R&D resources in Japan, but the ATRC’s ‘front line’ role has obvious advantages. The introduction of new vector control products and processes for indoor residual spraying or increasing the efficacy of long lasting insecticidal nets must take into account local environmental conditions and regional price sensitivities.  Moreover, field tests can benefit from immediate feedback from the products’ end-users and locally recruited staff.

But aside from the ATRC’s hard science capabilities, it also has ‘development’ credentials. It’s a local employer – 90 of the staff are Tanzanian – with employees’ wages supporting over 100 people.  And, albeit in a modest way, the ATRC is fighting the African brain drain.

Without the career opportunities offered by the ATRC, the majority of the centre’s talented young scientists would be looking to do their doctoral or post doctoral studies overseas or working for multinationals in more developed countries.  The ATRC is also offering internships to undergraduates and further education students so that they can gain practical experience of working in research labs.

The scientists are also gaining greater awareness of how businesses work.  The centre’s R&D projects focus on providing solutions to public health issues, but the research is usually approached from a commercial standpoint.  In short we’re helping talented scientists to develop new skills: we’re getting them to think like entrepreneurs.

But the ATRC has wider role to play in African development; its work isn’t confined to projects sponsored by VHI.  The aim from the start was to position the ATRC as a centre of excellence; a facility which could be used to form strategic partnerships and strategic relationships with a variety of national, regional and international institutions.

In the next blog, my colleague, Dr John Lucas, will be looking at a key aspect of sustainability in tackling malaria – the development of products designed to address the growing problem of insecticide resistance.