Africa Live: Roll Back Malaria concert aired around the world 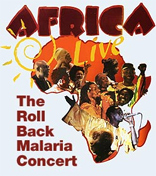 Sumitomo Chemical was lead sponsor of what has been called the “most spectacular festival of African music ever staged in Africa.” The Africa Live: Roll Back Malaria concert in Dakar last year brought the finest talents of African Music together to raise awareness about Malaria.

In March 2005, in the city of Dakar, capital of Senegal in West Africa, many of Africa’s finest musicians performed to raise global awareness of the malaria crisis currently devastating the African continent. Sumitomo Chemical was proud to be the lead sponsor of the concert, in partnership with the Roll Back Malaria secretariat, The United Nations Foundation, Novartis, Exxon-Mobil and others.

A film of the concert, AFRICA LIVE: The Roll Back Malaria Concert, has been aired in the United States on the Public Broadcasting Service (PBS), and a documentary has been seen by many millions of people following broadcasts by BBC, Arte, Tv5 and national television stations across Africa. A DVD of the documentary with bonus footage of the concert is now available for sale at major outlets worldwide. 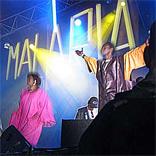 Produced & Directed by Mick Csáky, and presented by British music journalist and broadcaster Andy Kershaw, the program features acclaimed artists such as Awilo Longonmba from Congo-Kinshasa, Seun Kuti and Tony Allen from Nigeria, Manu Dibango from Cameroon and superstar Youssou N’Dour from Senegal using their talent to communicate through music a need for awareness and action to address the malaria pandemic.

The spectacular AFRICA LIVE: Roll Back Malaria Concert, produced by the Grammy award winning Youssou Ndour, was linked to the important work of the Roll Back Malaria Partnership which was established to provide a coordinated international approach to fighting the disease. The Partnership was launched in 1998 by the World Health Organization, UNICEF, UNDP and the World Bank. 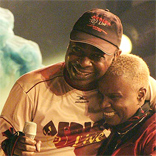 Youssou Ndour explains that he undertook AFRICA LIVE: The Roll Back Malaria Concert “because more than two million people die in Africa every year from malaria and we want to mobilize the international community to help us combat this very debilitating disease. The figures are very disturbing. Every year up to 500 million cases of malaria are being reported, with more than two million deaths. To put it another way, every 30 seconds a child under the age of five dies of malaria in Africa — that’s more than 3,000 every day, more than a million every year. It is too much!”

Producer & Director Mick Csáky, who conceived and filmed AFRICA LIVE: The Roll Back Malaria Concert says “In addition to communicating the Roll Back Malaria message, I was been keen to celebrate the quality and diversity of African music today by making it accessible to first-time audiences world wide. Every word of spoken dialogue and all the lyrics (sung in half-a-dozen different African languages) have been translated into English with subtitles, making it possible for television viewers to get closer to understanding African music than ever before.

The DVD version of Africa Live is now available worldwide for purchase. Clips of the concert and more background can be found at http://www.ideale-audience.com/africalivedvd/