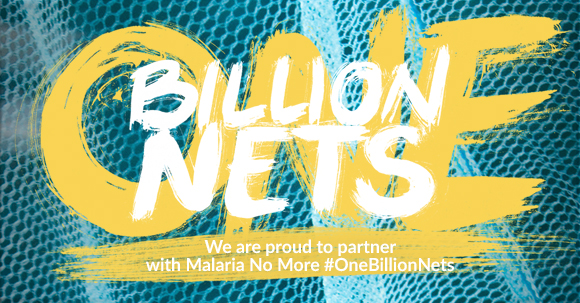 Together with our partners Malaria No More and the entire malaria community Sumitomo Chemical celebrates yet another momentous milestone in the fight against malaria with the delivery of the billionth mosquito net to Africa.

Since 2004 global health initiatives, led by the Millennium Development Goals, have had an unprecedented impact against the scourge of malaria that was once responsible for the death of more than a million people each year.

On April 25th, as we mark World Malaria Day 2015, there is a greater hope than ever before for a malaria free future. The distribution of a billion bed nets has resulted in a 58% decline in malaria deaths, 4.3 million lives being saved and 670 million malaria cases avoided.

These figures are astonishing in their own right, but the effects on families and communities all over Africa are truly immeasurable. 1.3 trillion safe nights under bed nets means millions more children in school and fewer pregnant woman dying from a preventable disease.

Demonstrating just how much a difference a net can make, let us introduce you to the Ochieng family, from Kisumu in Kenya, one of the parts of Africa with the greatest incidences of malaria.The recipients of the billionth bed net, their story is just one of a billion.

However, our work is far from over and there is still much to be done. Our ultimate aim is to reach universal coverage and protect every vulnerable person in Africa.   Our commitment is for the long term as each of the billion nets distributed needs to be replaced every 3-5 years.

There are also new challenges facing the malaria community as mosquitoes become resistant to the insecticides that we use to treat bed nets. This means that we must invest in new strategies and smarter, mixture bed nets to combat this new threat.

We are proud to have played our part in the successful control of malaria through continual product innovation, African manufacturing and global advocacy for the malaria cause.

So please join us in celebrating the achievements of the entire malaria community over the last 15 years and help to raise awareness of the continued fight against malaria by visiting 1billionnets.org and sharing your support on social media.