At an enchanting ceremony in Cotonou City, punctuated by traditional dance performances, Sumitomo Chemical donated 1,000 Olyset Nets to pregnant women and children under the age of five. The highlight of the ceremony was the speech given by His Excellency Professor Issifou Takpara, the Minister of Health. 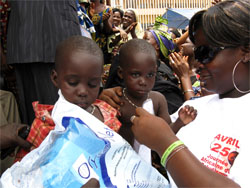 There was great excitement in Kombolcha, Ethiopia as Sumitomo Chemical and local partner Woinu Curtain Trade (WCT) sponsored the awards to participants and winners of World Malaria Day events. These included trophies, soccer balls, soccer uniforms, volley balls, and cash prizes for winners of matches and races. We were proud to receive certificates of recognition for our contribution in the fight against malaria in Ethiopia. Dr.Agonafer, the Head of the Malaria Consortium in Ethiopia served as Master of Ceremonies for World Malaria Day. The keynote address was delivered by the State Minister of Health, Dr.Kebede Worku, who was the guest of honor.

Dr. Tom Mboya of Sumitomo Chemical explained the significance of Japanese technology manufactured in Africa to the State Minister for Health, Dr. Aliyu Idi Hong – as well as in interviews broadcast on national television. The World Malaria Day Chairman and Secretary, Sir Patrick Ikemefuna and Glory Opusunju, were among the VIP delegation who visited our Exhibition Stand. 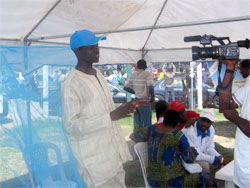 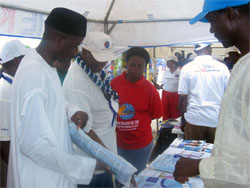 In London, Malaria No More UK visited No.10 Downing Street, where the door was hung with an Olyset Net. Last year the Prime Minister pledged the UK would deliver 20 million bed nets to Africa by 2010. On World Malaria Day, the Prime Minister confirmed the UK has already delivered almost half this total (9.7 million nets) and a further 1.9 million nets are on order. Malaria No More is encouraging the EU and G8 governments to deliver their bed net promises totaling 100 million bed nets by 2010.

Meanwhile, two of the UK’s top sporting heroes, England international footballer, David Beckham, and Britain’s top tennis player, Andy Murray, took centre stage at Wembley Stadium, to mark the launch of Malaria No More UK. Beckham, Murray and Olympic heptathlon gold medallist Denise Lewis are members of the Malaria No More UK Leadership Council. Beckham and Murray played football tennis, normal tennis, and ‘keepie uppies’ with footballs and tennis balls over the world’s longest tennis net spanning 68 metres, produced out of Olyset Nets. They moved onto football and took turns to take free kicks into the first ever bed net goal – made from blue Olyset Net. While Andy passed on a few tennis tips to David, David let Andy into a few secrets on how to take the perfect free kick. The games symbolised the urgent need for bed nets for those who die from malaria. 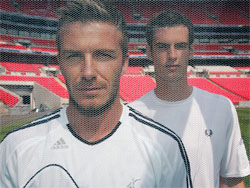 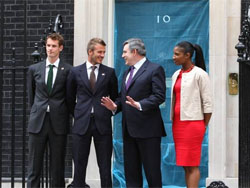 In Washington, Sumitomo Chemical was honoured to take part in the Malaria Champions Breakfast hosted by the Congressional Malaria Caucus, and in the One World Against Malaria Summit on Interfaith Action hosted by UN Special Envoy Ray Chambers and Ed Scott, Chairman of the Center for Interfaith Action (CIFA).

The event was the first of its kind, bringing together diverse actors from the worlds of faith, government, NGOs, the arts, and business, including the singer Quincy Jones, UN Ambassador Dr. Susan Rice, Archbishop John Onaiyekan and Sultan Muhammadu Sa’ad Abubakar, Co-Chairs of the Nigerian Inter-Religious Council, Rabbi David Saperstein, and Ann Veneman of Unicef, the Tony Blair Faith Foundation – and many world faith Leaders, all confirming their intention to act together to end malaria deaths by 2015.

The Tony Blair Faith Foundation presents “The Story of a Bednet”

Sumitomo Chemical was proud to provide the powerful Olyset Net photos of Maggie Hallahan for use in slideshows and video clips through-out the four-hour event, as well as on the covers of the Unicef report “Malaria and Children: Progress in Intervention Coverage,” and the Red Cross report “The Winning Formula to Beat Malaria,” that were both issued to coincide with World Malaria Day.

Maggie’s deeply human portraits convey the dignity and joy of good health conferred by long-lasting bednets. Maggie Hallahan is a widely respected editorial and advertising photographer. Her award-winning work has been published in hundreds of newspapers and magazines worldwide. Sumitomo Chemical is grateful to Maggie for applying her great talent to the fight against malaria.